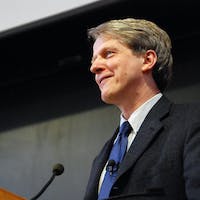 Robert J. Shiller is Sterling Professor of Economics, Department of Economics and Cowles Foundation for Research in Economics, Yale University, and Professor of Finance and Fellow at the International Center for Finance, Yale School of Management. He received his B.A. from the University of Michigan in 1967 and his Ph.D. in economics from the Massachusetts Institute of Technology in 1972. He has written on financial markets, financial innovation, behavioral economics, macroeconomics, real estate, statistical methods, and on public attitudes, opinions, and moral judgments regarding markets.

Bob was awarded the 2013 Nobel Prize in Economic Sciences for his "empirical analysis of asset prices.” His 1989 book Market Volatility (MIT Press) is a mathematical and behavioral analysis of price fluctuations in speculative markets. His 1993 book Macro Markets: Creating Institutions for Managing Society's Largest Economic Risks (Oxford University Press) (available via subscribing libraries on Oxford Online) proposes a variety of new risk-management contracts, such as futures contracts in national incomes or securities based on real estate that would permit the management of risks to standards of living. His book Irrational Exuberance (Princeton 2000, Broadway Books 2001, 2nd edition Princeton 2005) is an analysis and explication of speculative bubbles, with special reference to the stock market and real estate. His book The New Financial Order: Risk in the 21st Century (Princeton University Press, 2003) is an analysis of an expanding role of finance, insurance, and public finance in our future. His book Subprime Solution: How the Global Financial Crisis Happened and What to Do about It, published in September 2008 by Princeton University Press, offers an analysis of the housing and economic crisis and a plan of action against it. He co-authored, with George A. Akerlof, Animal Spirits: How Human Psychology Drives the Economy and Why It Matters for Global Capitalism published in March 2009 by Princeton University Press. His latest book, Finance and the Good Society, was published in April 2012 by Princeton University Press.His repeat-sales home price indices, developed originally with Karl E. Case, are now published as the S&P/Case-Shiller Home Price Indices. The Chicago Mercantile Exchange now maintains futures markets based on the S&P/Case-Shiller Indices.He has been research associate, National Bureau of Economic Research since 1980, and has been co-organizer of NBER workshops: on behavioral finance with Richard Thaler since 1991, and on macroeconomics and individual decision making (behavioral macroeconomics) with George Akerlof since 1994.He served as Vice President of the American Economic Association, 2005 and President of the Eastern Economic Association, 2006-07.He writes a regular column "Finance in the 21st Century" for Project Syndicate, which publishes around the world, and "Economic View" for The New York Times.