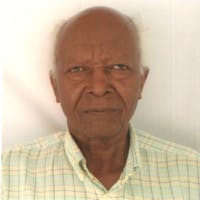 Mramba Nyindo studied veterinary science and animal husbandry at the University of the Panjab Lahore Pakistan. He also completed a second degree in veterinary medicine at University of East Africa, Nairobi campus.

Mramba Nyindo also holds an MS in veterinary medical science and a PhD from the University of Illinois Champaign - Urbana (1970-1975). It was at this university that he cultured for the first time Ehrlichia canis, the etiology canine ehrlichiosis (tropical canine pancytopenia), a fatal disease of dogs transmitted by the hard tick Rhipicephalus sanguinus.

Mramba Nyindo won the JO Albert award and received commendation as the best graduate student at the college of veterinary medicine in 1972. His PhD studies were on cell-mediated and humoral immune responses in dogs and ponies infected with Ehrlichia canis and E. equi, respectively.

Mramba Nyindo is an avid advocate of Team-based learning (TBL), a pedagogical teaching method which he introduced at KCMU Co. in July 2012.

Mramba Nyindo has worked for the International Center of Insect Physiology and Ecology (ICIPE) and Institute of Primate Research (IPR) National Museum of Kenya. He started teaching at Kilimanjaro Christian Medical University College where he is Associate Professor in Parasitology, Entomology and Immunology and Head, Department of Parasitology and Entomology.

Mramba Nyindo’s research interests are in neglected tropical diseases including worms, protozoans and vectors. Of all the parasites he has studied and researched on, he has special interest in schistosomiasis. He also has interest in prostate cancer and cell biology of prostate cancer in East African patients. Mramba Nyindo has published several papers in peer review journals.